Home > NEWS > The smart guide to your language stay in Chicago: everything you need to know

The smart guide to your language stay in Chicago: everything you need to know

Chicago is the third largest city in the United States. It ranks just behind New York and Los Angeles. It's a very good city if you want to strengthen your English and discover another environment. Doing your language course in Chicago will surely give you the desire to settle in the United States, so good to live.

CHICAGO IN SOME KEY POINTS
Chicago is a very eclectic city. We never get bored here and we'll prove it!

Population: 3 million
Area: 606 km²
Nickname: "Windy City", the City of Winds
Symbol of the city: the ox
Currency: The dollar
Language: American English
Politics: Since May 2011, Rahm Emanuel is the mayor of the city
The city is not limited to these few informations. We'll take you on a discovery trip to get an idea of ​​the wonderful things that await you during your stay in Chicago.

THE CLIMATE
The four seasons are quite marked here. You will soon realize. The city is nicknamed the City of Winds and it fits him like a glove. When the wind blows, it is rather violent and icy squalls that shake the city.

Little tour of the four seasons:

IN SUMMER
It is particularly hot because the burning air goes up from Mexico. As for moisture, we can not escape it. This causes thunderstorms but still it remains the sunniest period. For the temperatures, they juggle between 22 and 32 ° C.

IN AUTUMN
Unlike ours, fall is very short. It lasts only two months: September and October. This is one of the best seasons to go to a language study trip in Chicago. Indeed, the air is less stifling, the rain is more rare and the sun is still the tip of his nose.

IN WINTER
If you like the cold, come to Chicago in winter. The climate is icy cold from November to March. Canada's Far North is leading the freeze on the city. The thermometer can indicate up to -30 ° C. Snowstorms replace the beautiful autumn sun.

IN SPRING
The spring season is the most hazardous. We can go from the cold to the heat, snow squalls to violent storms. Temperatures and climate are not at all stable during this period.

Chicago is therefore at a crossroads where all natural phenomena meet.

USEFUL AND UNUSUAL INFORMATION
THE STORY
Chicago is a city very marked by its history. It all started with the Indians. The city was covered by the waters and they called the Checagou river like the onions that grew there. Thanks to its geography, the place becomes an exchange point for the fur trade.

During the conquest of the West, Americans hunt Indians. The city becomes the hub of the rail network. It is now possible to reach San Francisco by train. Some people from Germany and Ireland arrive. A "riot of beer" broke out in 1855, police and emigrants opposed.

The American Civil War turned Chicago into one of the largest livestock markets in the country. The prohibition landed in the city from 1919 to 1933 creating an illegal distillation industry. Murders and corruption are steadily increasing and Chicago's reputation is turning sour.

Today, despite a painful past, the city is the second industrial pole of the United States. It even fixes the price of wheat and soy. Chicago is also the reference when it comes to openness. To have elected a woman as mayor, then a black man and finally a black woman in the Senate. Things have really changed.

TRANSPORTATION
During your stay in Chicago you will notice that the city is very sensitive to ecology. She is the founder of the carbon footprint reduction program in the United States. Public transport is well developed. The car is simply useless.

THE BUS
The transit system is called the Chicago Transi Authority. There are no less than 200 lines serving the city. Every day of the week, schedules start very early and end very late.

It's pretty convenient to get around, no matter what time. The ticket is paid directly to the driver and if you want to get off, you have to open the bus door yourself. Do not stay stuck!

THE METRO
8 lines make up the metropolitan network. The rails are, for the most part, aerial. There are very few undergrounds. To get to the main tourist sites, it is better to use the metro.

THE BIKE
Self-service bikes are offered by the city. The bike paths are numerous, clean and well maintained. You can even carry it on the subway. This is useful if you are late, tired or if time starts to turn at once.

THE COST OF LIVING

Chicago, like many American cities, has a high cost of living. It is about 22% stronger than at home. The budget can explode especially on the cost of housing or food.

On the other hand, for all that is shopping, you will be able to make you pleasure during your linguistic stay in Chicago since the prices are 9% less expensive than in France. 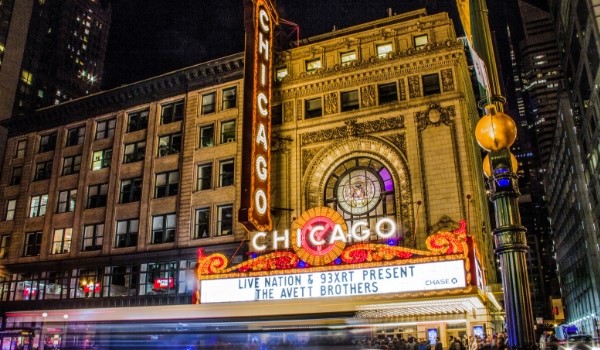 THE DEEP DISH PIZZA
If we only have to mention one specialty in Chicago it's the deep dish pizza.

BUT WHAT IS IT ?
This is a pizza with a very thick crust because it is cooked in a mold with high edges. Add a spicy tomato sauce, a consistent garnish such as sausage, pepperoni, peppers, onions, anything that can be put on a pizza what! Finally the highlight of the show is the ton of cheese that is affixed to it. The latter must drizzle well at the end of cooking.

WHERE'S SHE FROM ?
The creator of this very light recipe is Ric Ricardo. In 1943, he decided to try the recipe for American soldiers returning from Italy. In order to regain the taste of the pizza they ate there. Its restaurant, Pizzeria Uno, has made a fortune thanks to this invention.

WHERE TO TASTE IT?
If you're dreaming of a deep dish pizza during your stay in Chicago, you'll have no trouble finding one. The recipe has even crossed the borders. Many chains have taken this pizza. Remember to order in advance because the cooking of this thick paste is still long, about 45 minutes.

Have a good meal, of course !

THE DISTRICT DISCOVER
Neighborhoods in Chicago are numerous. Each has its own identity but there are some more attractive than others. This is the case of :

THE LOOP
The Loop (mouth in French) represents the business district. Its name comes from the fact that the trams encircled it in the 80s. Then it was the turn of the metro. He also saw the birth of the very first skyscraper! Today, there are hundreds of buildings.

TO SEE:
The sculptures: between two buildings, art is omnipresent. There is Alexander Calder's Flamingo, Miro's Miss Chicago, and The Picasso by the famous Pablo Picasso.
Millenium Park: This is an urban park of almost 100,000 m². The infrastructures are specifically dedicated to contemporary art. Throughout the year animations and events take place.
Willis Tower: 108 floors, 442 meters high, it throws! It is possible to climb at the very top, if you do not suffer from vertigo. The view is of course impregnable.
MULTICULTURAL QUARTERS
Many people from around the world come to Chicago. They then gathered in neighborhoods where ethnic groups live together. During your language study stay in Chicago you will have the opportunity to visit:

Greektown: where lives the largest community of Greeks. Of course, you can taste the best falafels in the city.
Little Italy: to change the deep dish pizza and succumb to the flavors of Italian cuisine.
Chinatown: What is an American city without its Chinatown?
Pilsen: less easy to guess than others ... Here are grouped Mexicans and other Hispanic nationalities.
THE QUARTERS FOR PARTY
Chicago is a busy city but some places are famous for their nightlife. Bars, restaurants, nightclubs ... all styles are present.

Old Town: Old stronghold of the hippies, the bars are very "arty".
Lincoln Park: In addition to the bars, you can also take the opportunity to visit the Lincoln Park Zoo which is free.
THE QUARTIERS CHICS
There are neighborhoods in Chicago that exude elegance and luxury. The largest boutiques and the most prestigious hotels are grouped in three large and beautiful neighborhoods. River North, Gold Coast and Streeterville are mentioned.

EVENTS NOT TO BE MISSED
Your language study stay in Chicago will be marked by a whole bunch of events regardless of the month of the year. We offer you a small sample for you to get an idea.

SEPTEMBER
Each year, Grant Park hosts the Chicago Jazz Festival. It's an entirely free festival that has seen and still sees large jazz bands.
OCTOBER
Columbus Day: Christopher Columbus's discovery of America is celebrated on October 12, 1492.
Halloween: Americans are ultra fans of this holiday. Young and old are disguised for the occasion. If you are on a language trip to Chicago during this period, enjoy it. The change of scenery is total.
NOVEMBER
Dia de los Muertos: The famous Mexican Day of the Dead has crossed the borders and is also celebrated in Chicago. The atmosphere is crazy and the colors extraordinary. This is an event not to be missed.
The upcoming Christmas season is being celebrated with the Magnificent Mile Lights Festival. The big shopping street saw its trees lit up with a thousand lights. Fireworks are also fired.
DECEMBER
December 31 is marked by lavish fireworks fired at Lake Michigan. A majestic event.
JANUARY
The third Monday in January is Martin Luther King's birthday.
FEBRUARY
President's day: this holiday in the whole country is held on the 3rd Monday of the month. It honors Presidents Washington and Lincoln.
MARCH
St Patrick's Day: parades, entertainment and lots of beers are on the agenda for this Irish party. In mid-March, all Chicago is dressed in green.
APRIL
Arts, theater, literature, history, philosophy ... a cocktail to celebrate all the humanities during the Humanities Festival.
JUNE
Still at Grant Park, this time it's the blues that is the setting for the Chicago Blues Festival.
AUGUST
Lollapalooza Festival: world famous music festival.

You will not be bored during your language study trip to Chicago. We warn you, we fall easily in love with this American city. You will tell us news!