Examinations of Cambridge, TOEIC or TOEFL, the tests of languages ​​optimizing the school career of a student are numerous. Offered at school, these internationally recognized assessments can be made during a language study stay. Explanations:

"The French are bad at languages! ". "You do not learn to speak a language at school." To take the opposite of these stubborn stereotypes in the mouth of both French and foreigners, language study is the ideal program. Linguistic immersion lasts about two to four weeks and allows a person of any age to discover or deepen a new language. Housed in a host family or in a residence, the temporary expatriate can enjoy a total integration in the environment of his choice. If he wants to deepen the English, he will have the opportunity to do it in Britain - a group of countries preferred for its quality / price ratio -, but also the United States, Australia, Canada or ... the Malta, a country currently in vogue to improve the language of Shakespeare. If it is a learning Spanish, the Iberian Peninsula appears as the ideal destination. But Latin America, for its exotic setting, is an eldorado of the linguistic stay. Mexico, Costa Rica or Colombia then become highly qualified executives to improve in Spanish.

WHAT IS A LANGUAGE EVALUATION?

In most cases, applicants who seek information from specialized agencies to find a school choose a part-time or part-time formula. The latter makes it possible to carry out one's linguistic excursion by promoting the learning of the language in the morning. The afternoon is, for its part, reserved for practice through sports and cultural activities and various leisure activities sometimes included in the trip. This formula is the best way to link theory to practice and to make unforgettable encounters that will become friends. For the more persevering, the intensive courses - composed of a larger volume of time - exist. The advantage of the language stay therefore lies in its flexibility and adaptability to the profile of each. Open to everyone from primary school, language study is an important educational contribution in terms of employability. This can be achieved by obtaining an official language test recognized around the world.

Globalization and the competition it has created has made these unavoidable language tests sometimes required to integrate certain universities or to apply for a job. The skill levels defined by the Common European Framework of Reference for Languages ​​(A1, A2, B1, B2, C1, C2) are not sufficient. After high school and high school, a professional project in the field of international marketing or languages ​​requires higher degrees. The assessment validates a candidate's language level and allows them to gauge their language skills. Organizations and other certifiers have entered this buoyant economic market. With more or less success because all evaluative tests do not have the same serious analysis. Plethora of applications on smartphones and number of tests on the Internet have developed in recent years in front of a growing demand of students. Although they have the advantage of being free, fast and easy to use, these evaluations are not scientifically proven. For this, the Association of Language Testers in Europe (ALTE) has created a regulatory framework and standards common internationally to certify tests deemed sufficiently credible.

THE MOST (RE) KNOWN TESTS

The prestigious English university with international fame has created nearly fifteen additional exams to reveal its level of language. Whether for academic or professional purposes, these assessments are aimed at students as well as employees or jobseekers. The most widely used is the First Certificate in English (FCE) which certifies a B2 level corresponding to a "fluent" mastery of the language. For example, English-speaking business and engineering schools require this level to integrate them. There is also the Key English Test (level A2) and the Préliminary English Test (level B1). In order to prove a higher level after the baccalaureate, it is recommended to pass the Certificate in Advanced English (level C1) and the Certificate of Proficiency in English (level C2). The cost varies according to the exam and prices start from 150 euros. The advantage of choosing Cambridge exams is the lifetime validity of these exams.

The most common test is the Test of English for International Communication, also known as the TOEIC. Of American origin, this evaluation is based on the written and oral comprehension of the candidate. The TOEIC is especially appreciated in France and recognized after French recruiters worried that the candidate has a bilingual level. Indeed, it is part of a professional setting, unlike the TOEFL (see below) with academic sensitivity. Clearly, the TOEIC will be required by English-speaking companies to ensure that the candidate can work there. And, the TOEFL will be required by English or American universities to follow courses perfectly. The TOEIC is valid for two years. Its cost is low: from 84 euros for job seekers to 103 euros as basic rate.

Created by the leading educational assessment company, the Educational Testing Service (ETS) in the United States, the Test of English as a Foreign Language (TOEFL) is aimed at a candidate in university. Four main skills are assessed: reading, writing, listening and speaking. These are the basics for assessing the level of English. The TOEFL is recommended for students wishing to study or work abroad as it is recognized in each of the English-speaking countries. In addition, it is considered essential for a person who expresses the desire to join an American or Canadian university. Like his close cousin, the TOEIC, it is valid for two years. The International English Language Testing System or IELTS is an alternative known to be easier than the TOEFL. For the latter, it takes about 220 euros to spend it.

To prove your level in Spanish, the Diploma of Spanish as a Foreign Language (DELE) increases the chances of finding a job or an internship in Spain or South America. Awarded by the Cervantes Institute, the DELE takes place in two events. Like the English and American tests, they judge both the candidate's written and oral abilities with an understanding and expression part. Unlike the TOEIC and the TOEFL, the DELE has no time limit after graduation. It is valid for life. 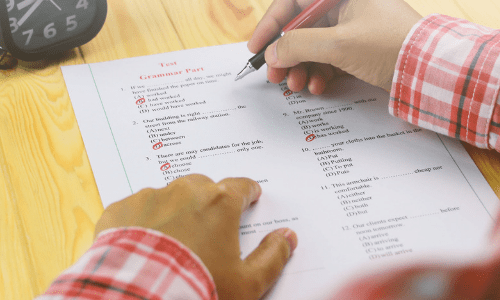 Language tests usually include a Multiple Choice Questionnaire (MCQ) that candidates must complete.

A POSSIBLE TEST AT THE END OF THE LINGUISTIC STAY

From the beginning of the language stay, each person is invited by the language school to take an assessment test. It's systematic. The goal is to assess everyone's level and then move them to an appropriate class at their level. According to its evolution on the spot, the expatriate in linguistic immersion has the possibility to change. At the end of his stay, it is possible to pass one of the tests detailed above. It is even possible to do this directly within the host institution directly. Thus, the high school student, student, employee or job seeker can register a new line to his Curriculum Vitae. And, why not start a good international career?