Many French people - whether students, executives or jobseekers - make the choice of a language course. The program promises a double interest: to learn or to perfect a language and to live an extraordinary journey, outside the hexagonal borders. Danilla Charini, part of a language study stay in Auckland (New Zealand), tells her story.

Originally from Guadeloupe, Daniella Charini is a young woman of 25 years old. She has several linguistic strings to her bow. Daniella is fluent in French, English, Spanish and Creole. The bilingual even has some notions in Mandarin. For almost three years, she has worked in the finance industry. It is, according to her, "an area in which to master several foreign languages ​​is strongly recommended". In order to perfect her learning of Shakespeare's language, she flew off with Holingo's language study program.

HOLINGO: WHY HAVE YOU DECIDED TO DO A LANGUAGE STAY?
Daniella Charini: Although with a good level of English at the base, I realized that, spontaneously, my English was not fluent enough. I lacked practice. So I decided to take a language study trip to confront my language skills with the reality of life in an English-speaking country. Indeed, curious to learn new languages, I think that being immersed in a country is one of the best ways to progress quickly in a language.

HOLINGO: WHAT CAN YOU TELL US ABOUT LIFE IN NEW ZEALAND AND ITS INHABITANTS?
D.C .: It's good to live in New Zealand. It is a country that I would advise to discover at least once during his life! The New Zealand landscape is absolutely beautiful. Lakes, natural parks, volcanoes, beaches ... there is something for everyone. It is the ideal place for all nature lovers and long hikes. However, while transportation and food are relatively affordable, accommodation is still rather expensive.

HOLINGO: AS YOU TAKE A SPECIAL CULTURAL SHOCK?
D.C .: No, I did not feel any particular cultural shock, I found the New Zealanders very friendly and hospitable. However, even after spending a month in the city center, I still struggled to get used to driving on the left. The good reflexes took a long time to settle!

HOLINGO: WHAT HAVE YOU LIKED? WHAT did YOU like less?
D.C .: I was in Auckland, on the North Island of New Zealand, it is a city on a human scale. What I really appreciated there is the speed at which we could change the landscape. And as a result, the diversity of activities that could be practiced. You do not have to go hundreds of miles to get from the mountains to the sea or from the city to the sea. The proximity to nature and ecological awareness of New Zealanders also surprised me. I just regret not being able to stay longer to discover other places in New Zealand, especially on the South Island. This is surely a good reason to return one day! 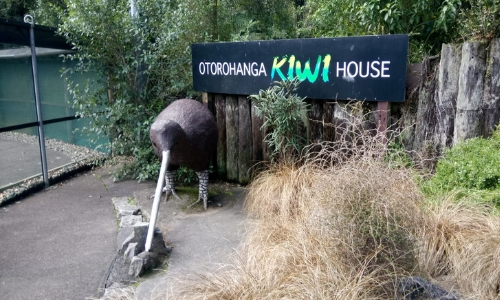 During her language stay, Danilla Charini visited the Kiwi and Bird Sanctuary in Otorohanga, New Zealand.

HOLINGO: WHAT MEMORY HAS PARTICULARLY MARKED YOUR TRIP?

D.C .: The memory that has most certainly marked my trip is the disguised evening organized by the members of the school. Every two months, they organized a theme party. The one I attended took place a few days before my departure. My Japanese friend and I were disguised as mothers. We had a great evening! As much teachers as students! All had played the game and developed great disguises, an unforgettable atmosphere!

HOLINGO: DO YOU HAVE THE IMPRESSION OF IMPROVING YOU IN ENGLISH?

D.C .: Yes, absolutely! Because being surrounded by students of many different nationalities allowed me to force myself to speak only English. I was able to gain ease and fluidity. Everything was in a very good atmosphere. This also makes it easier to remember the vocabulary learned.

HOLINGO: HOW WILL THE LANGUAGE STAY HELP YOU FOR YOUR FUTURE?

D.C .: This trip has allowed me to go a long way and become more comfortable. I feel much more comfortable expressing myself now, which will be very useful for working abroad for example.

HOLINGO: WHAT ARE THE TIPS THAT YOU SHOULD GIVE TO THOSE WHO WANT TO LEAVE AS YOU IN LINGUISTIC STAY?

D.C .: I would tell them to go for it, not to hesitate if they have the opportunity, because this experience will enrich them on many levels, human, psychological, linguistic or relational.

HOLINGO: WOULD YOU RECOMMEND THE HOLINGO SERVICE? IF YES, WHY ?
D.C.: Yes, absolutely, because I feel that I have benefited from a good accompaniment throughout the preparation of this trip. In addition, the opportunity to discuss - upstream and on site - directly with one of the school officials allowed me to learn more fully. That reassured me. I received very useful advice for my stay.