Home > NEWS > The smart guide to your language stay in Dublin: everything you need to know

The smart guide to your language stay in Dublin: everything you need to know

Dublin is known and recognized for its cozy atmosphere and bubbling pubs. Walking or cycling, along the streets and the cultural wealth that the city offers. If you choose Dublin for your language stay, you are likely to be anything but disappointed! Holingo gives you all the information you need before you leave.

DUBLIN IN SOME KEY POINTS
To get an idea of ​​the Irish capital, there's nothing like knowing your identity card.

Population: approximately 553,165 inhabitants in two territories, County Dublin and Greater Dublin
Area: 115 km²
Nicknames: The city of a thousand and one colored doors
Money: Although linked to the United Kingdom, Ireland, and thus Dublin, uses the euro since 2001
Languages: Dubliners speak English and Gaelic
Politics: Brendan Carr elected in June 2016
But Dublin is full of little secrets to come discover language stay.

If you chose Dublin for its sun, you are completely wrong about the destination for your language stay! The climate is oceanic and temperate but humidity is ubiquitous with many days of rain. It's simple; in one day you can have all four seasons!

Dublin is the capital of Ireland which is ranked as one of the rainiest countries in Europe. The rains never last too long, but there are still 250 days of rain a year. The umbrella is the essential accessory for a language study stay in Dublin.

If you go on an excursion all day, do not forget to take business as well summer, autumn, winter and spring. Just that !

The ideal time to go to a language study stay in Dublin is from April to September. The temperatures are not too cool and the rain is much less present than in winter. If you can choose, the must is the months of May and June which are the sunniest.

USEFUL AND UNUSUAL INFORMATION
Dublin is a city on a human scale that can be discovered in three days. Use the free time of your linguistic stay in Dublin to discover the unusual places to be missed under any circumstances.

It's HISTORY
At the time, 140 after J-C, Dublin was named Eblana. It was a fishing village and farmers because it was close to the Liffey, the main river flowing into the city.

It was not until the 9th century that the city was built by the Vikings. They build an imposing fort. The walled city then bears the name of Dubh Linn. But it's not counting on the Anglo-Norman who seize it. Dublin Castle is born.

A conflict between Ireland and England lasts until the 20th century. The Irish organized a revolt in 1916 known as the Bloody Easter. It is a bitter failure that remains, even today, in the memories.

TRANSPORTATION
The Irish drive on the left, of course! If you want to rent a car do not neglect this detail. It is done very quickly but there is still a time of adaptation to erase our French reflexes.

If you do not feel up to driving independently, think of taxis. This means of transport always seems very expensive but not in Dublin. The prices of the races are much lower than in France. They are quite numerous, we only rarely queued to get one.

The bus and train serve the city very well but they have the disadvantage of being quite expensive. You also have the option bike which is really not bad for both travel and fitness! Otherwise, use your feet since the city is not so big.

FOOD AND DRINKS
Dublin's flagship drink is Guinness. This beer was introduced to the market in 1759 and it produces more than 912 million liters a year. But Dubliners are not the biggest consumers of brown drinks. First place goes to Nigeriens. The Guinness Museum is to visit during your language study stay in Dublin.

The pubs of Dublin are as beautiful as historical monuments. It's an entire institution. We go there with friends, family or even alone to read a book in the afternoon. The interiors are just magical and each establishment has its peculiarity. Yes, whether we say it or not, Irish pubs are not associated only with alcohol and debauchery!

At the level of gastronomy, in Dublin we eat the very famous fish and chips. This dish is to be tested urgently if it is not already done! Another must in Irish gastronomy: bacon and cabbage. Very original this dish can be a little scary. It consists of cooked bacon slices, with cabbage and crushed potatoes. All this is relieved of a sauce with herbs.

We can not be more Irish than the Irish Stew. It's a kind of lamb stew with potatoes, onions and carrots. A soup that is very consistent.

For breakfast, you can try Irish Fry. With this dish you can be sure that your stomach will leave you alone for a while. On the plate there are: beans cooked in a tomato sauce a bit spicy and smoky taste, slices of bacon, waffles of potatoes. And we do not forget the toasted bread!

If you spent a lot of time walking down Dublin, you will have the right to have a snack. And what better than a little cupcake. There is something for everyone: chocolate, fruit, speculoos ... we will not make you the list it would be much too long!

Money
Ireland is considered one of the most expensive countries in Europe. The cost of living is therefore quite high, and Dublin is no exception. However, the price difference with those practiced in France is not super important.

The difference is mainly in hygiene products. When you pay a bottle of shampoo a little over 3euros50 at home, in Ireland it takes 2 euros more. If you are staying in Dublin for a long enough period, you can take the opportunity to register for a gym. The monthly subscription is 50% cheaper than in the hexagon.

The big question of the tip is going to be elucidated! There is no obligation to leave a tip because it is included in the service but if you want to be generous, it is all your honor!

UNUSUAL PRACTICES
THE ANIMATED CHURCH
There is one must-see and unusual place to discover in Dublin: The Church. This church was first transformed into a restaurant. In view of its success, the owners have decided to expand its services. It is now possible to eat there but also to sip a cocktail or drink a beer and even ... to dance there.

Yes, the church is transformed into a nightclub and even offers an outdoor terrace called "Bee Garden". Barbecues and summer evenings are de rigueur here!

The architecture has been completely preserved, even the organ is still in place. Imagine when concerts are organized ... The sound is awesome!

MOLLY MALONE
Legend has it that every visitor to Suffolk Street stops in front of Molly Malone's statue and ... caresses her chest! A lucky charm that lasts in time.

Molly Malone was a beautiful fishmonger who died after a cholera outbreak. It seems that at night, she became a prostitute. She is the heroine of Dublin's unofficial anthem, Cockles and Mussels.

This iconic character is nicknamed "The Tart With the Cart" by the people of Dublin.

DO YOU HAVE SUN?
The Irish mill owners have the obligation to make them walk clockwise. If you are an observer, you will see that all those of the country turn in the same direction, the opposite to France.

POLAND IN IRELAND
Surprisingly, Polish is the second most spoken language in Ireland. It is placed even before the Gaelic. You can enjoy your language stay in Dublin to learn both English and Polish!

The immigration of many Polish is at the origin of this. It is not uncommon to see Polish shops in the streets of Dublin. There are fewer and fewer people of Polish nationality because the economy in their country has improved and many have chosen to leave again. 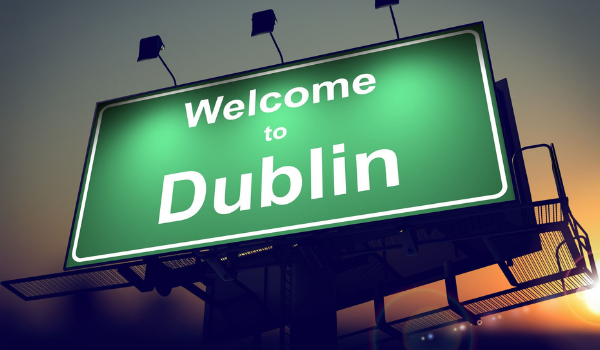 PROHIBITIONS
We often speak of the essentials to do during a language study stay in Dublin. But here, we look at things not to be done!

We do not roll right
We just saw in the "transport" section, the Irish roll left. So, we put all his attention on this detail. And if you are pedestrian it's the same. Remember to look first left then right before crossing ...

We do not talk about war
If in France one is quite comfortable with the war in Ireland the subject remains sensitive. Why ? For the Irish revolution ended only in the last century. It's still very fresh in the memory of the Irish and it's not a very happy memory.

You do not drink alcohol on the street
Drunkenness on public roads is reprehensible in France, but the authorities are quite lax about this practice. This is not the case for Ireland and even less so for Dublin. Tolerance is close to zero and the police make no gift.

We do not compare anything and we profit
When you go on a language study trip to Dublin, it's not to regain your comfort and your French habits but to immerse yourself completely. It is important not to compare and adapt. We take the opportunity to discover novelties that we will not find on his return.

We do not hope for a meeting with Leprechaun
Even if this little humanoid creature is, for you, the perfect symbol of Ireland, do not try to meet one at all costs. This character is rather out of a fairy tale than a Dublin alley. So difficult to cross one and become his friend ...

Do not bring your snake to Dublin
St. Patrick would have chased all the snakes off the island by throwing them from the top of Croagh Patrick. There is no longer any snake in Ireland since. Do not have fun bringing back yours, you could wake up the anger of dear Patrick!

We do not leave a pub without having paid our round
If you are in a bar with friends, and one has just paid for his tour, you already know that the next will be yours. You have understood, the more you go in number the more you will drink and the less you will be rich ... It is the law of the country! It is recalled that Guinness is to drink in moderation.

THE SAINT PATRICK
We celebrate more and more in French bars, Saint Patrick is the Irish holiday par excellence. Beer, music and crazy dancing are on the program of this extraordinary festivity. She is also named Paddy's Day.

On March 17 each year, the Irish gather in the pubs of the city. The atmosphere is family and friendly. This dear Patrick is one of the patron saints of Ireland. It is this same person who put the clover in the spotlight, using it for the Trinity.

The dress code of St. Patrick's is ... the green! The inhabitants, the streets, the shops ... everyone is adorned with the emblematic color of the country. In Dublin, the party starts on March 16th and ends on the 19th. An endless animation, where the change of scenery is total.

You now have all the cards in hand to make you a linguistic stay in Dublin. Do not hesitate to make the most of this city of a thousand secrets and traditions.